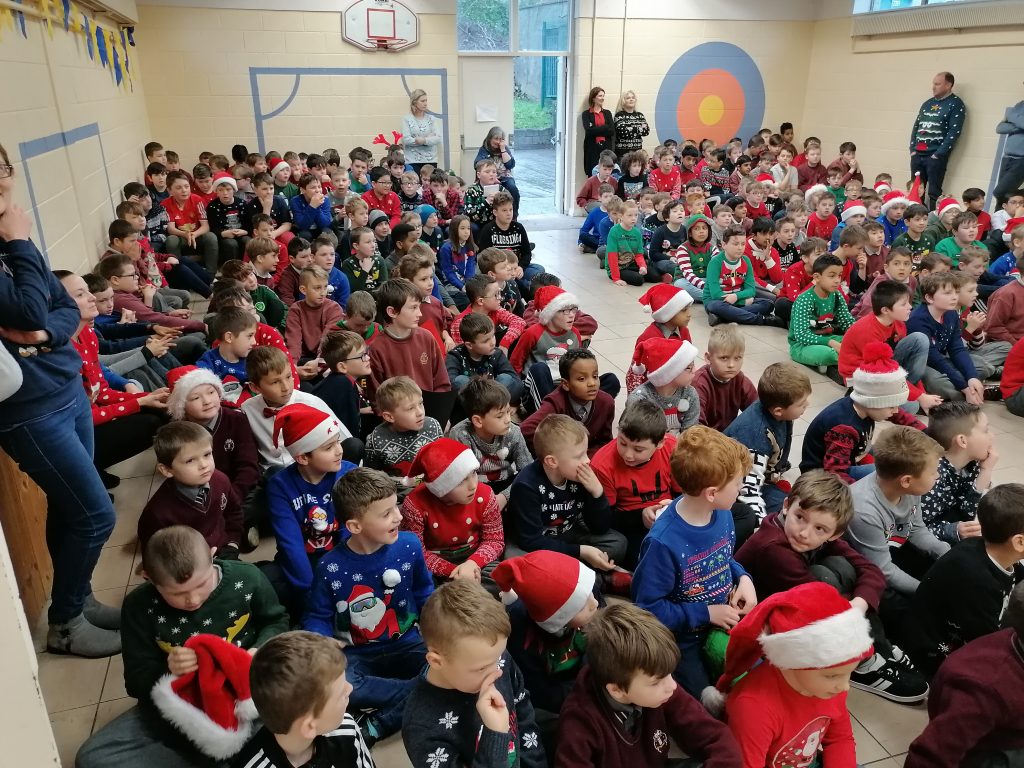 Today we had an assembly in the GP room.

We started off the assembly with procedural writing winners.

We heard some brilliant procedures from boys in each class group. Well done lads!

We also acknowledged the boys who had done well during the term.

Boys who scored over 150 points on Mangahigh received their medals.

We also recognised the Act of Kindness boys.

We had a very special visitor today to Nenagh CBS primary.

Santa Claus came and he brought some festive cheer to the whole school.

Santa also gave each of the boys a selection box. Everyone was absolutely delighted with this visit.

What we did this month

This month was very busy for our class.

We all performed wonderfully at the school concert which was held in the secondary hall. We joined Ms Glennon’s boys on stage and it was a great night altogether.

We practiced procedural writing this month and wrote some really excellent pieces. John from our class was the winner and read his procedure to the school at assembly.

In the build up to the holidays, we went to the church to see the boys from St Mary’s junior boy’s school perform their concert. We also visited the Church of Ireland to see the Christmas tree exhibit. This was brilliant.

In art, we created our Abstract Christmas trees and we also designed our own Christmas cards.

Our class wrote an amazing procedural story on ‘’How to Have the Best Christmas Ever” and “how to decorate your Christmas Tree”. We also went to the crib St Marys and also saw the Advent Wreath.

We took part in our Christmas concert with the boys from Mr Smith’s class. We sang three songs and also recited a poem called “A Reindeer for Christmas”

They had a visit from their elf on the shelf called “Buddy”. He got up to lots of mischief. Finally, they made Lovely “no sew snowman” as Christmas ornaments, using an old white sock and rice.

Room 2 have been very busy this term preparing for our Christmas Celebration where the boys sang two songs “Somewhere in my memory” and “Consider yourself” with the other third class.

Some third class boys also performed with the choir for their debut performance in front of a great crowd for the Christmas Celebration.  It was a fantastic night for all.

In maths the boys are continuing with the multiplication masters challenge and are steadily learning their tables.  Also the boys had lots of fun covering length and fractions getting plenty hands-on experience in exploring both areas.

This month our class have been given the opportunity to learn the great game of “Chess”.  Colum and Jimmy come on Fridays and the class are very excited to be learning some new skills and strategies.  Some boys have taken the opportunity to acquire chess sets from Colum so as to practice at home.

In history we have learned all about Mesopotamia and this ancient Civilisation, as well as map drawing and atlas work

It has been a very busy term.

We had a very busy month in Room 1. We spent a lot of time rehearsing for our Christmas concert. We performed “Somewhere in my memory” and “Consider yourself” with Ms Liston’s class. We also got to visit the Christmas tree festival which was lovely.

We made lots of Christmas art and we made some Christmas tree decorations out of clay and painted them. We are very excited for Christmas.

Mr Hayes class has had a very busy month preparing for Christmas. In art, we have made Christmas cards, painted starry night scenes and are continuing our construction project with artist Rachel. We performed there play at the Christmas concert and everybody done amazingly well on the night.

In English we are almost finished their novel Tom Crean and we’ve all enjoyed reading about his adventures on sea and ice. In Irish, we have discussed what we would all want for Christmas. We are all excited for the 25th of December.

The highlight of December for Mrs Spaights class was performing in the Christmas concert. We also enjoyed all the other performances as we were able to see all of them the morning after the concert. We added to our success by making hot chocolate. Soon after that we wrote a procedure on how to make hot chocolate. We’ve been busy getting ready for Christmas which involved art and making Christmas cards as well.

We visited the Christmas tree festival in the Church of Ireland to see all the creative different trees. As well as that we put up our own Christmas tree in their class! We have been busy doing wellbeing activities from our wellbeing jars daily and are enjoying this every day.

Our class performed an excellent play called The Tale Of The Gingerbread Man for the school concert. We also went to see the Christmas tree festival in the Church of Ireland. With that we went to the library twice in December. We made chocolate biscuit cakes in the school kitchen. We finished long division in mathematic which we were happy to do.

We completed procedure writing for assembly. We are carol singing in the Obama Plaza on Thursday the 19th of December. We are also going to the church again to see the crib. On Wednesday the 18th of December we are making hot chocolate with marshmallow.

We are still doing chess with Colm and Jim. We even started going to the Library.

In math, we did adding and subtracting fractions, decimal and percentages.

In English, we read the Little Match girl, Homonyms, verbs and Procedures.

In S.E.S.E, (geography) we did the Burren,weather,climate and atmosphere. (history) we learned about our family crest and in science we did a science experiment  on “what happened when warm air meets cold surface.

In religion we learned about the first Christmas, The birth of Jesus and John the Baptist.

December has been a very busy month for 6th class. Earlier in the month we prepared for the Christmas celebration with everybody taking part in “Christmas in the trenches”.

The boys really enjoyed becoming part of World War 1 and simultaneously we learned lots about the war in Geography, History and English.

We have also been busy preparing our Christmas carols for our Carol singing Day in Barack Obama Plaza on December 18th.

Samuel Par was the winner of our procedural writing this term. We all wrote out the Materials required and step involved in “How To Build a Robot”. Well don Sam.

We learned about Christmas all around the world as well as Preparing for the coming of Jesus during this advent season.

On December 10th the boys got the opportunity to spend a day in the C.B.S Secondary school taking part in lots of fun activities such as coding, woodwork, painting and P.E.

And finally to calm us all down following our busy and hectic schedule in December, 6th class took the opportunity to practice some well being activities over the past few days. We meditated, did some mindful colouring and enjoy many mindful minutes.

They went to the Church of Ireland to see the Christmas tree festival which had  loads of creative designs and ideas. In English they learnt all the different Christmas traditions around the world. With that they had an open day in St. Josephs CBS which involved PE, woodwork, art and coding. They also done procedure writing on anything they knew how to build or make to read out at assembly on the 18th of December.

The boys in 5d worked hard on their procedure writing this month. They learnt how to make brown scones and followed the recipe on Odlums  website. They also wrote out the recipe and the steps needed to make them.

They visited the Christmas tree festival in the Church of Ireland and found it very enjoyable. They also made lots of art this month. They created Winter scenes and made a Christmas tree out of rope craft. They are all really looking forward to their Christmas holidays.

An Edmund Rice all boys primary school 2nd-6th class located in the heart of Nenagh.

It promises to be a great family fun event. 🙌

Thanks to @SupermacsIRE for looking after our boys today after their carol singing. A great day was had by all @Obamaplaza. Mìle buìochas do gach èinne.

Boys from @nenaghcbsp carol singing in @Obamaplaza this morning. Huge thanks to @Obamaplaza for having us for the day. #HappyChristmas