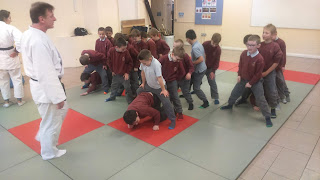 By William Greene Posted at February 6, 2019

This month has been a very busy month for our class.

We are busy preparing for our sacrament of Reconciliation for the first time.

For Catholic schools week, all the boys from our class and St Goban’s did a project on one of our grandparents. We had Grandparents’ mass at St. Mary’s of the Rosary church on Wednesday, 30th of January. It was wonderful to celebrate the day with many grandparents of boys from the entire school.

In maths, we looked at fractions and money.

In geography, we learned all about homes and houses. We looked at different types of homes in other countries and homes of Irish animals like the fox and the badger.

We started judo with James Mulroy on Fridays. This is something that the boys are really enjoying.

In art, we made penguin wall paper.

We were very busy in St Goban’s the last month.

We learned about conservation of water and the water cycle in geography science and the seaside in history.

We started the BFG this month and are really enjoying it Judo takes place every Friday in the GP room.

We are currently busy practicing out hymns and prayers for the grandparents mass and the sacrament of reconciliation.

St Fintan’s have been very busy this month. We have finished our swimming lessons for this term ad we are excited to start rugby. We have also started soccer with John Paul.

We had a lot of fun learning all about the rainforest, especially the Amazon in Brazil.

We have started writing our narrative and look forward of writing entertaining stories. We are working hard on our active flag and are trying our best to complete our tour of Europe.

St Flannan’s have been very busy since we came back break.

In art, we made day sculptures and painted them when they dried out.

In science, we put water and oil in a container and observed what happened. It turns out that they do not mix they do not mix and we came up with some ideas on how to separate oil from water.

We have begun to write and plan our narrative writing and also learned a funny poem about teachers.

St. Thomas has been busy since we came back from our Christmas holidays. Some of the boys started tag rugby and they are really enjoining it. We learned all about Nenagh.

We learned about historical features and geographical features that surround our town. The boys wrote thank you cards for the people who looked after us on our outings last term. The boys delivered these and everyone really appreciated it. We started filling in our Get up and Go diary’s .They have a daily motivational quote which we discuss and try to live by.

St Enda’s have been very busy since we came back studying the weather.

We have looked at various climate types around the world in addition to identifying cloud types and presenting the weather forecast.

We also studied Artic Regions focussing in particularly on the Inuit people of the Artic region.

In maths we learned how to read time from both analogue and digital clocks.

We are continuing to learn the Tin Whistle and have learned “Christ be beside Me”, “Peg Ryan’s Polka” and “Cill Mhuire” .

In school, we had a very busy month.

We made clay pots.

We have started swimming.

We learned how to add fractions and we also learned the song “Heal the World.”

Cody’s Family welcomed new sister into the world on 5th of January her name is Belle.

Michael, Zakk and Max have been picked for North Tipp trials.

It has been a busy start to the year for St Conall’s sixth class.

In January, we studied the foundation of the first Dáil and it’s the 100 year commemoration this year.

We studied and assessed the work of Giuseppi Acrimboldo and drew some fruit face portraits.

We also started our 5 week Judo programme with James Mulroy. This has proved to be very enjoyable. We look forward to what next month brings.

Catholic Schools Week is in January and we have been reflecting on the themes each day, we have also been learning hymns in preparation for our Grandparents’ Mass.

Our school is going for its 5th green flag – biodiversity.

In Geography and Science we have been learning all about Seal Rescue Ireland, which is based in Wexford and is run by volunteers. We learned about all the different things that can affect seals in the waters – pollution of plastics being a major problem. We identified the two most common seals to Ireland and how to tell them apart.

In History we read about the Titanic and learned about the lives of different people who sailed on it and how they ended up on it.

We discussed how a tree contributes to biodiversity and we started building a tree in Art with chicken wire. We will cover it in paper mache next.

In English we read up about biodiversity, why it’s important and what dangers there are to it. We have also started the writing genre ‘Narrative’ and are looking forward to writing our stories.

In Irish we have learned the poem ‘Sneachta’ le Micheál Ó’Donncha, which seems to have brought on the snow!

We learned about the artist Alberto Giocometti and saw some examples of his sculptures of people.

We discussed action poses in line with our Active Schools Flag and we all created poses, firstly with pipe cleaners then we covered them with clay and spray painted them. We then used pic collage to set the scenes for our sculptures.

We have been doing laps of the junior yard each morning as part of our Active Schools initiative.

This week we had Catholic Schools’ week at Nenagh CBS Primary.

We had daily thoughts and prayers broadcast on the school intercom system by the 6th class boys at 12pm.

In preparation for Catholic schools week, all the boys from our 2nd classes, St Gall’s and St Goban’s, did a project on one of their grandparents.

We had Grandparents’ mass at St. Mary’s of the Rosary church on Wednesday, 30th of January.

Grandparents were invited to share and participate in this mass and the school had an amazing response.

It was wonderful to celebrate the day with many grandparents of boys from the entire school.

Many thanks to all who came and shared in this day.

Special thanks to those grandparents who contributed with readings, prayers of the faithful, psalms and presenting gifts.

Also the school would like to thank Fr Des Hillery who celebrated the mass and assisted the staff in a big way in the lead up to Catholic Schools’ Week.